Keratoconus is a corneal ectasia. This means that the structure of the cornea is weaker than in an unaffected eye, which results in the cornea warping, thinning and bulging forward. Imagine that the normal cornea is like a soccer ball; in keratoconus, as the disease progresses, the cornea becomes more and more like an ice-cream cone. It typically affects both eyes. This is a major issue as glasses and soft contact lenses are unable to improve vision as the disease progresses.

The cause of keratoconus is still unknown and much medical research is being conducted to determine this. However, we know that keratoconus tends to run in families and is often identified in people who have allergies (asthma, eczema, hay fever). We also believe that eye rubbing can worsen the disease and it is critical that this should be ceased.

How common is keratoconus?

It was thought that keratoconus affects 1 in 2000 people and affects men and women equally. However, a large study (of 4.4 million people) in the Netherlands identified a prevalence rate of 1 in 375 people. Keratoconus may be a lot more common than we think.

Does keratoconus get better?

Keratoconus is generally a disease of young people and tends to stabilize by itself in the mid-30s. However, whatever damage is done is irreversible.

How is keratoconus treated?

First developed in 1998, collagen cross-linking (CXL) is the primary method of treating keratoconus. It aims to halt the progression of the disease and “lock” the cornea in its current position. It works by using riboflavin eye drops (vitamin B2) and ultraviolet light to create bonds between the corneal collagen fibres, thus stiffening and strengthening the cornea. It mimics the corneal stiffening process that naturally occurs with aging, but at a much faster rate.

CXL is the only proven technique available for the treatment of keratoconus and can be used to halt the progression of any corneal ectasia. It does not improve vision; instead, the aim of this procedure is to stabilise the cornea and prevent keratoconus from getting worse. Results from multiple randomised clinical trials have demonstrated that CXL halts progression in over 90% of treated eyes. 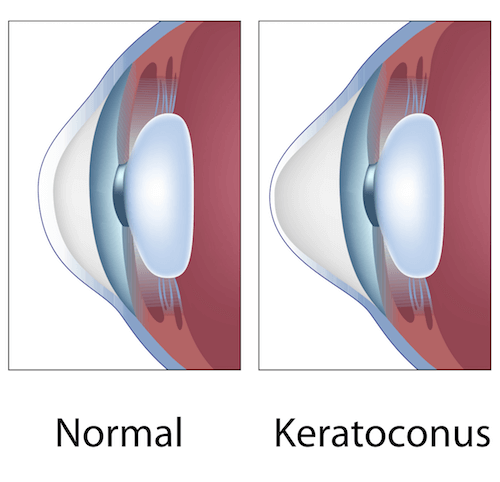